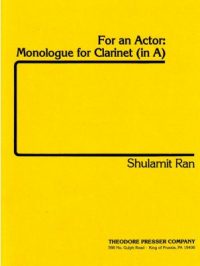 For an Actor was composed in 1978 for clarinetist Laura Flax, a performer and friend that Ran collaborated with for many years.She writes, “in MONOLOGUE, the player assumes the role of a virtuoso actor who, by purely musical means, goes through a kind of wordless monodrama.”Though written with precise rhythm, the piece is not metered, the better to allow for the “considerable measure of freedom, temporal and gestural” that the performer is encouraged to introduce. Though not classically a sonata form, it retains elements reminiscent of one: exposition, development, cadenza, and coda (though not a true recapitulation). The opening quarter note bells of E-A-Bflat-G divide the sections, as they are restated to begin the development and the coda, the latter in the form of a reordered inversion. These are all strong, grounding statements – the music of the rest of the piece is almost always in motion, changing between frantic, energetic states and an uneasy quiet, but here there is rest and stability. Ran does not explicitly give many emotional states or motivations for the clarinetist-actor, but the nature of the music demands the full emotional range of the player.

This is challenging piece – in addition to the emotional demands of the player, For an Actor requires great control of the altissimo and virtuosic playing in every register. However, because most the of piece is restricted to traditional technique, For an Actor is quite approachable for a clarinetist new to contemporary repertoire. The extended techniques used are idiomatic and easy to perform, especially the three multiphonics, all of which are consistent and easy to voice properly. There are a couple small moments of nested tuplets, providing an opportunity for learning how to interpret such rhythms.

For an Actor is published by Theodore Presser.

Listen to Laura Flax perform For an Actor: