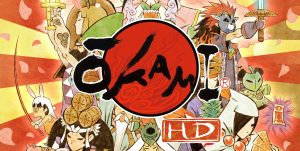 You play as the Japanese sun goddess Amaterasu, awakened on Earth in the form of a white wolf. You are accompanied by the tiny traveling artist Issun, and the two of you travel Japan solving problems and defeating demons and monsters pulled straight from Japanese mythology and storytelling. Kaguya-Hime and the bamboo cutter are here, as are Urashima Taro and the clan of sparrow from the Tongue-Cut Sparrow. These tales and many more are woven organically into the game world and told colorfully and with great humor – the best example is perhaps the transformation of the god of storms Susano into a lazy descendent of a great warrior who gradually learns his true potential.

The game has been positively compared to the Zelda series, and for good reason – you fight through dungeons, gain new abilities for your Celestial Brush that are not unlike the hookshot, bombs, and ocarina songs from that iconic series, and defeat bosses using your new abilities. Issun plays the role of companion to an unspeaking protagonist not unlike Navi or Midna, and the game released in the same year as Twilight Princess, which incorporated its own lupine gameplay.

What does all of this have to do with composition? When I started at UCSD in 2010, I took a course with soprano Susan Narucki called “Instant Operas”. Each composer in the class wrote a new opera that quarter, and I chose the initial story conflict in Okami – the legend of the dragon Orochi – as my subject. The result was my opera The Eighth Daughter, exploring the emotions of the family falling victim to Orochi before Susano’s appearance in the tale. Where in the original tale, the young woman Kushinada barely has any agency, my own Kushi is based on her characterization in Okami, where she shows resolve and bravery in facing the dreaded dragon.

The following year, I began to study the Japanese language in UCSD’s excellent Japanese department, spending four years of study. This led to an interest in Japanese traditional music, especially gagaku, which I studied and developed transcriptions of for my qualifying exams in 2014. This close study of gagaku has had an enormous impact on the way I make music, especially in how I think about time and pacing. I think you can hear this especially well in my 2016 piece for flute and light, Komorebi, which perhaps more than any other piece of mine focuses on shading and shadowing individual notes with microtones and harmonics.

I’m very much looking forward to revisiting this colorful world and reflecting on what it’s meant to me as an artist.